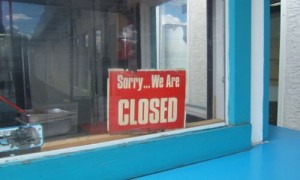 One of the most annoying things you will hear over and over when you tell people you are thinking about starting a restaurant is how often they fail. Everyone seems to be an expert on restaurant failures and everyone seems to “know” they are risky businesses to start.

But is that true? No. There is a risk in starting any business and restaurants are no different. But 9 out of 10 don’t fail in the first year. And the failures that do happen in many cases could have been prevented by better planning. You don’t see 9 out of 10 Starbucks, McDonalds or Chipotles closing a year or less after opening so obviously it doesn’t have to happen.

You may think that is different because they have more money behind them or more marketing but think about it for a minute. The marketing they have is the brand they’ve built but they also took the time to find a good location where their customers live and where there is demand for their products.

They didn’t just pick the first cheap location they could find. And they certainly continue to market all the time even though they do have good brand names. A new independent restaurant can do the same- find a good location based on planning and understanding the market they are going to serve and then aggressively market their concept.

Likewise, although the chains do have solid financial backing, why would you want to start a restaurant without adequate funding? Of course you are going to run the risk of failing if you don’t have the money to do it right. If you plan properly you can very easily establish how much the “right” amount is and not start until you have it secured.

There is no reason for restaurants to be a risky investment if you take the time to create a proper restaurant business plan and actually understand what you are getting into so you can do it right like the successful chains do for each new location they open. If you don’t take the time to plan then you will take on the level of risk you deserve for not doing the simple front end work you could have done to protect yourself from that risk in the first place.

“Nine out of 10 restaurants fail in the first year.”

As an associate professor in Ohio State University’s Hospitality Management program, H.G. Parsa had heard it many times before. But based on his 13 years of restaurant-industry experience, he still didn’t buy it.

Parsa wasn’t surprised. He had run several spreadsheet simulations to verify the statistic himself and found that not only is the 90% figure off base, it’s practically impossible, given industry growth rates. He decided to do his own research on failure rates, using Health Dept. records to track turnover among 2,500 restaurants in Columbus, Ohio, over a three-year period.

His research—consistent with similar studies—found that about one in four restaurants close or change ownership within their first year of business. Over three years, that number rises to three in five.

While a 60% failure rate may still sound high, that’s on par with the cross-industry average for new businesses, according to statistics from the Small Business Administration and the Bureau of Labor Statistics.

Parsa’s study garnered serious attention within the hospitality field: Within a year of the paper’s publication in the Cornell Hotel Restaurant Administration Quarterly in August, 2005, Parsa’s research had been downloaded nearly 2,000 times, a record for the trade journal. But in the culture at large, the nine-out-of-10 myth has stubbornly defied debunking.

What Any Business Can Learn from This

That last one would have saved the bacon of many a restaurant owner I’ve known who succumbed to the failure stat. There are some businesses where you can learn on the job, but not many. If you don’t know what you are doing, then find someone who does and listen to their advice until you have the experience and the data to prove trying something else may also work.

Businesses don’t have to fail- some of it is out of your hands but most of it isn’t! Be smart with how you do things and you are bound to be successful. If not the first time, then the second or third. If you keep failing after that, it’s not the business, it’s the owner!