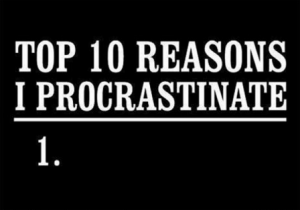 Sometimes people get the idea that real entrepreneurs are hard chargers who never hesitate and do everything immediately. That’s not true.

There are lots of successful entrepreneurs who are just like everyone else when it comes to getting going- sometimes it is harder than others. Sometimes it is really hard.

The difference is that they have figured out strategies to get themselves going when they need to, and they aren’t held back from achieving success by a lack of drive when the time for action comes. If procrastination is holding you back, you can use the same techniques to overcome it in your own life, and achieve the same success they have reached.

There are several strategies for beating procrastination, which you can use separately or together to get yourself going. They are time segmenting, reframing, just starting, reversing priorities and good enough.

Time segmenting means taking a small chunk of time and dedicating yourself to working on whatever you need to do during this time, and then giving yourself a reward for doing that immediately after. Often procrastination is a result of the reward seeming so far away it is too hard to use as motivation. This is particularly true in starting a business, since it may be months before the business actually launches, and months more before you get and kind of real financial reward.

An example of this strategy would be to set aside thirty minutes to work, and then reward yourself with a break to watch TV for half an hour, or play a video game, or read or whatever else seems rewarding to you.

The reason this strategy works is that doing a big chunk of work seems overwhelming, so you never start, but knowing you are only doing a half hour seems much more manageable. Once you get into the work, however, you often end up going much longer than half an hour, and get more done that you expected. This strategy simply allows you to mentally overcome your block on getting started.

This may sound difficult, or unrealistic. In reality, however, all it usually takes is a conversation with yourself to realize that the negative task you are dreading is actually a positive step towards something you want. This makes it much easier to motivate yourself to do.

If this is about procrastination, isn’t the whole issue “just starting”? Yes, but this is different. Sometimes you don’t start something because the whole project seems like one big task, and you don’t know where to start and anything you do will hardly make a dent in the overall project.

With this strategy, the idea is to take the whole thing you have to do and break it down in a list format into very small segments. These should be things that you finish in as little as ten to thirty minutes. You may end up with a long list, but since no one item is going to take very long, you can just assign yourself a few items to work on at a time.

In this way, you only have to overcome a tendency to procrastinate for a small task, not a large one. And eventually, you will complete all the small task that once seemed like an unmanageable whole.

Sometimes people procrastinate because they feel like all of the time they have should be going to work, and they have no free time. They want to “take” more time for other things and put off work.

By reversing priorities, you start by blocking off time for everything else you want to do- all the fun activities or other time obligations you want to commit yourself to doing. Then, whatever is left over is work time.

The reverse psychology of this approach- making sure you have time for fun before you worry about work can sometimes force you to get more done in the time you have left yourself to actually work. It is also true that in a typical eight hour work day, there are very often several hours of not very productive time.

If you think of it as forcing yourself to work under short blocks of time before you have to quit to go do things you enjoy, you may actually be more productive and get more done. You may also find yourself wishing you had more time to work, and wanting to start sooner or work longer. You might not think that you can reverse psychology yourself, but you can!

One of the less common reasons for procrastination is a sense of perfectionism. The way this works is, you feel as though you have to be perfect, but this is a stressful and demanding situation to be in, so you hold off on doing the project at all until the last minute. That way, at least you have the excuse of not having had enough time to do the job perfectly.

The way to overcome this is to simply realize that the perfectionism is what is holding you back. You don’t have to be perfect, and in fact, the chances are that whatever you thought was perfect will have to be changed anyway when the reality of the business world hits home. So what you should aim for is simply good enough to start with, with the intention of going back later and improving on what you have done. Once freed from the need to be perfect, you can get started without further concern.

The best strategy to beat procrastination is to simply employ as many of these tactics as you need until you feel comfortable getting started on what you need to do. First, take a minute to reframe the situation in your mind and realize not what you don’t want to do but what you will get by doing it that you want.

Then start by making your list of small tasks, small enough to fit into a time segment you can live with. Then block out all your play time, and see what is left for work. Tell yourself you just need to get it started, it doesn’t have to be perfect. And then begin. At this point, there shouldn’t be anything standing between you and getting going.